Somehow I managed to crash my iPad 2 by trying to edit an image in the Photos app. This is a repeatable problem and I’ve tried restarting, closing all apps and it still happens. Check out the video below to see the problem in action

The offending image is below: try saving it on your iPad and try editing it in the Photos app to see if this happens on your iPad.  In current testing, it doesn’t seem to affect the new iPad (3rd gen), iPhone 4 or iPod Touch (4th gen).  I can still edit other photos or screenshots so this totally puzzles me and is completely reproducible. It this another one of those special Apple bugs just for me? 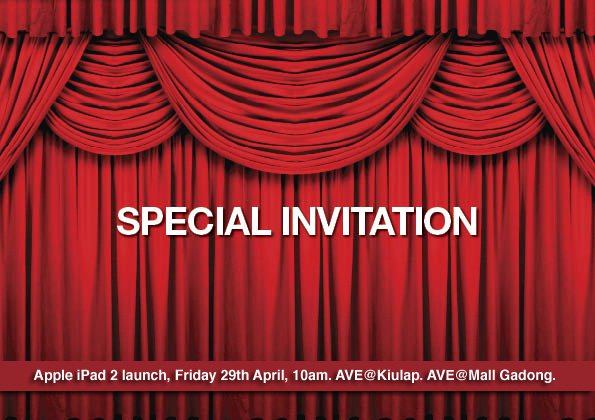 After hearing word of the iPad 2 launch in Singapore on the 29th while doing Tech Talk Coffee Shop tonight, I was surprised to see that AV Electronics, the premium Apple reseller in Brunei is also having their launch on Friday 29th at 10am at both their Kiulap and Mall stores. Singapore prices are listed below and I would think Brunei prices will be slightly higher, perhaps B$50 to B$150 higher, but kudos to AV Electronics for getting it the same day as Singapore. From the Facebook page AVE mentioned that they have “around 100 different SKU of accessories” but the iPad 2 dock won’t make it in time for the launch.

You can stream UBDFM natively, without installing any application, on any iOS device (iPhone / iPod touch / iPad) by

This is shown pictorially bellow and may not be a perfect solution, I heard that it does not play in the background but I’ve tested it on my sister’s iPad with iOS 4.2 and it seems to work flawlessly. Feedback is appreciated =)

So my sister got an iPad and one of the first things I did was to load up my Unofficial Lite Edition of The Brunei Times E-Paper to see how it looked and I was surprised at how bad it rendered the text in the images. It looks fine on my computer and even on a Nokia E71. I wonder why it looked bad on Safari on the iPad. Now if I saved the image and viewed the saved photo in Photos, it turned out fine. Anybody care to explain this to me?

Note: this seems to happen with images that are bigger than the native resolution of the display (or that have to be scaled down in Safari. If I open an smaller image that does not require scaling, the text is fine and clearly visible

Below: Nokia E71 (in Web Browser) and iPad (in Safari) showing the same page (iPad image seems slightly out of focus but close up of the iPad image can be seen in the 2nd photo)

Below: Close up of the page in Safari

Below: As mentioned, if I save the image and open it in Photos it seems fine.

The Apple iPad was just announced yesterday and Engadget has a nice launch day roundup for their coverage and if you read the editorial many are disappointed or don’t see anything great about the device. While it is an evolutionary device it could have been killed by the hype of what it would be and how it would revolutionize the way we use tablets (which it doesn’t as the moment). Touted too much of a tablet, it is actually more of a media player / content consumption device / ebook reader.

Some of the iPad specifications:

Coming for a netbook background all these specifications look great except for the iPhone OS and possibly the price point. Most netbooks have a 10” screen with a resolution of only 1024×600 and most websites made for these lower resolutions especially since the browser window (with toolbars + menus) already consumes some screen real estate leaving an even smaller portion for proper web browsing. Having a 1024×768 resolution screen that can be oriented landscape or portrait gives the device added flexibility in rendering webpages.

The biggest issue is that it comes with the iPhone OS which limits connectivity with only iTunes and that it does not do real multi-tasking (limited multi-tasking ala iPhone). Multi-tasking is a huge factor if they’re touting it as a tablet which is why I don’t really consider it a full-fledge tablet but more of a bigger iPod touch and fits in between an e-book reader and a tablet (both of which where widely seen at CES this year: e-book readers and tablets at CES). For now I will stick with my netbook and wait for ION (or similar technology) to get better for possibly gaming netbooks like the upcoming Alienware M11x.

So in essence the iPad is a bigger iPod touch: more than an e-book reader, less than a tablet

Issues with the iPad