I know I was a bit confused when initially rooting and installing custom ROMs on my Android device and while I don’t consider myself an expert there are a few terms that could use a quick definition to know your way around custom ROM installations.

Boot loaders can be locked which prevents custom ROMS from being flashed. Unlocking the bootloader can be done with the following commands (this was done on a Nexus 7 2013, other devices may need other commands)

Once the bootloader is unlocked you can install a custom ROM. While I believe it is possible to install custom ROMs without a custom recovery program, the typical way to install a ROM is with one. I’ve used ClockWorkMod Recovery and Team Win Recovery Project (TWRP) but there are others other there. Just make sure you install the right one for your device. 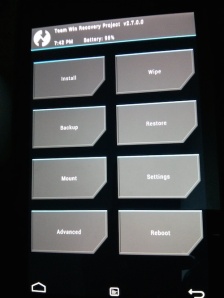