Got this from C.F.King’s price list / brochure / leaflet / whatever you want to call it: 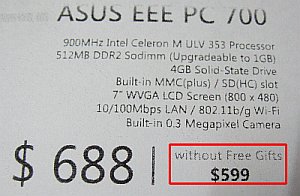 Made me question what does “Free Gifts” mean.
Via Google’s define feature (because Oxford dictionary is too complicated for me)

I would guess the typical perception/definition of “free gift” in this situation is would extra things given on top of the price of the object bought. However the different price of the unit “without Free Gifts” completely contradicts with this typical perception/definition. Thus this leads me to what does “Free Gift” mean in this context: it’s not stated in the brochure itself and I just see it as deceptive marketing. It makes the (potential) buyer that for the stated price you are getting a good deal because you get a bunch of free (having no cost) gifts. But when you realise that this isn’t the case, it’s not only deceptive but also hurts sales of products such as the Eee which is aimed more for the low end market. Bundling these “free gifts” which actually aren’t and thus increases the price, it could also put people off buying these products which are good for those who want a small light device for light web surfing, email and word processing. Oddly enough, it would have been ‘better’ if they had never revealed the “without free gift” pricing and nobody would have complained or be annoyed with this business practise.