After stumbling across this complaint on DST’s promotion of bundling an Acer Aspire One with Go! subscription I went down to DST to find out whether the complaint was valid. The promotion banner is shown below 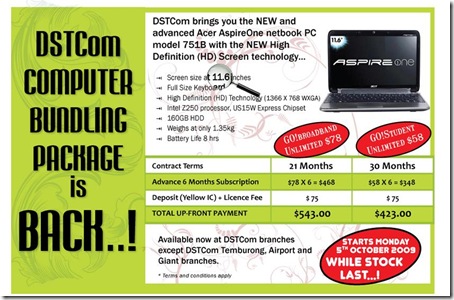 The complaint basically says that the $543 up-front payment advertised is for the laptop + modem and not the 6 month subscription which would add up to the same amount. If this was the case it would have been a real scam and after my findings that Concepts is not recycling and also Sheraton pizza issue makes me wonder if we need a consumer rights / better business bureau in Brunei to monitor and catch any businesses doing any sleight of hand tactics or wordings that will misled customers.

So I went to DST in Delima and asked if the promotion was still valid. I was told that it was no longer valid so my hopes were dashed to find out if the complaint was valid. So a few weeks later I went to pay my mom’s DST bill and thought I would ask if there were any laptop promotions for the Go! subscription as previously had and I was in luck. The lady at the counter told me the offer of the Acer netbook was still valid, though low on stock (about 6 units left). So after she explained things to me I found out that the complaint that $543 was to pay for the laptop and modem is not true for the current promotion. Now things could be different now than what was previously told to the customer when they made this complaint. It could have also just been a staff member who did not understand the promotion or was simply trying to personally scam the customer or it could even be DST changing the promotion. But that aside, according to her the lady basically you are just paying $78 x 21 months for the regular non-student Unlimited plan and that the only extra charges is for the deposit ($50 for locals, $100 otherwise) and license fee ($25). The $543 is an advance for the last 6 months of the subscription meaning you pay ($543 + deposit + license fee) up-front and 15 months of $78 (or 24 months of $58), starting from the month after purchase. This means locals will pay in total $1713 ($543 + 15 * 78) for the regular package or $1815 ($423 + 24 * 58) for the student package (foreigners add $50 due deposit of $100 instead of $50)

So in essence you are signing up for a 21 (or 30) month contract and you pay a flat rate of $78 (or $58) a month and you get a free netbook and modem which is a pretty darn good deal. As with all contracts you are tied down to the provider and in this case it’s for 21 (or 30) months which may seem long but you could easily get a 3G wireless router (eg. Prolink 3.5 mobile broadband router) to connect the modem to and use it for Internet at the office or at home. A very viable option for office use without having to pay commercial prices for an E-Speed line.

So DST has this offer going for their mobile broadband while bmobile has their iPhone promotion. Being somebody who is looking for an unlimited 3G broadband plan both these offers seem enticing and will be something I cover in a future post as I decided which one to take, if any at all.